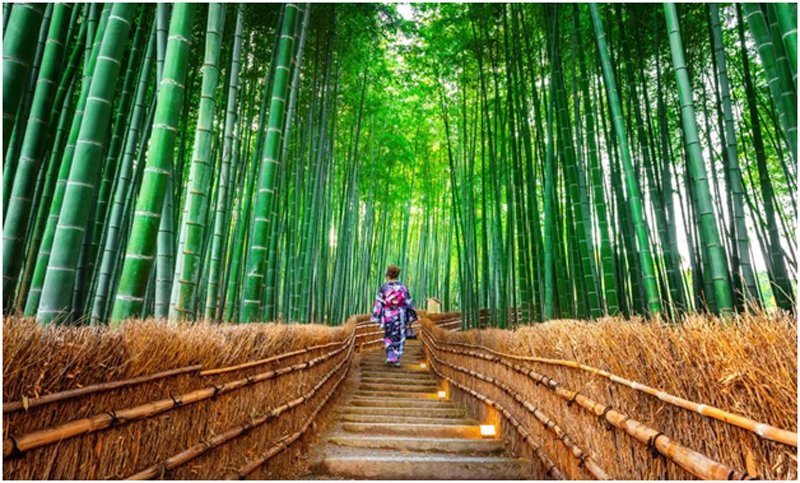 Japan is a land of dichotomy, always maintaining a balanced approach to modern advancement and tradition. Where other cities in Japan have technology, Kyoto has temples, reigning as the country’s cultural capital.

When Kyoto was initially listed as a target for the catastrophic a U.S. atomic bomb during WWII, the Secretary of War demanded that it be taken off due to its cultural importance.

Travelers can learn all about art, tea, Zen Buddhism, and other pillars of Japanese culture all within the borders of this easily-accessible city.

Kyoto is world famous for its wonderful temples and shrines. But that’s only the beginning of the story.

Kyoto is always a good idea. Visitors flock here during spring (April) to marvel at the eruption of cherry blossoms or fall (November) to admire the equally stunning koyo, a colorful palette of Japanese maple.

Summer is the best time to enjoy kawadoko, a unique tradition of dining on tatami patios that are stretched over the cooling river.

Winter is perhaps the least touristy season which means only one thing—no need to elbow through the crowd to enjoy city’s cultural gems blanketed in snow.

No festival in town can quite match the grandeur of the Gion Festival.

One of the most famous festivals in Japan, Gion Matsuri is Yasaka Shrine’s annual event taking place in July and culminating on July 17 and July 24 when elaborately decorated floats, Yamaboko Junko, are paraded along the main streets.

It’s a perfect time to watch Kyotoites promenade in colorful yukata robes, feast over delicious Japanese street food, and party until the wee hours of the night.

Let’s explore the best things to do in Kyoto 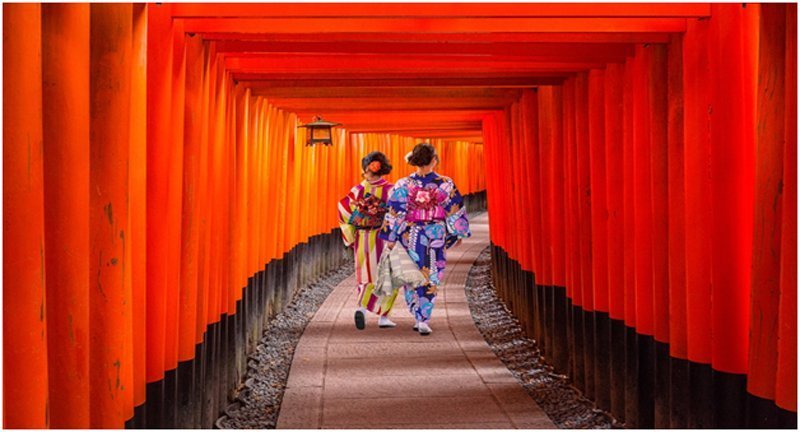 Kyoto’s most iconic treasure, the Fushimi Inari-taisha Shrine is located at the end of a flamed colored walkway made up of thousands of traditional torii gates.

Visitors can easily spend a day wandering through the trails surrounding the network of ornate shrines.

Half way up the mountain, expect incredible views of Kyoto at the Yotsutsuji Intersection 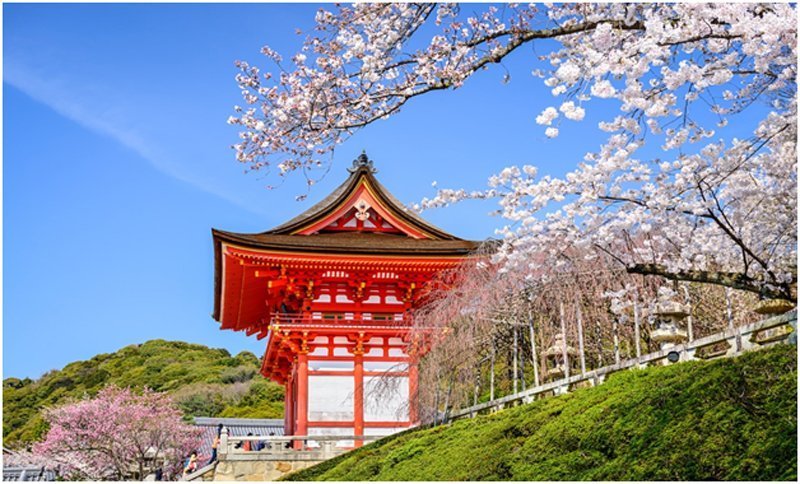 Atop a beautiful hill is the Kiyomizu-dera Temple, a UNESCO World Heritage site surrounded by cherry trees.

The temple is known for hosting an array of magical features. Walk between two stones with your eyes closed in front of the Jishu Shrine, build to honor the god of love. If you can do this successfully, then you will find true love.

The shrine is also connected to the Otowa Waterfall, which is incorporated into a separate shrine and divided into three streams symbolizing success, love, and a long life. Drink from the stream that correlates to your greatest desire for good fortune.

This shrine is definitely worth the visit not only because of its beauty but also because of the mysticism that surrounds it. 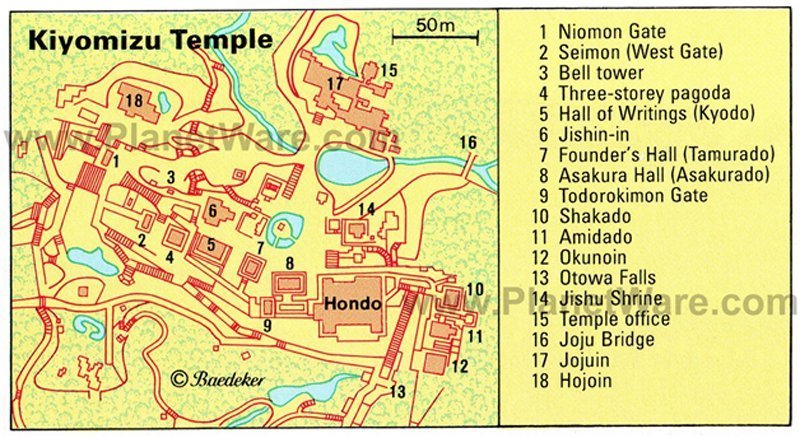 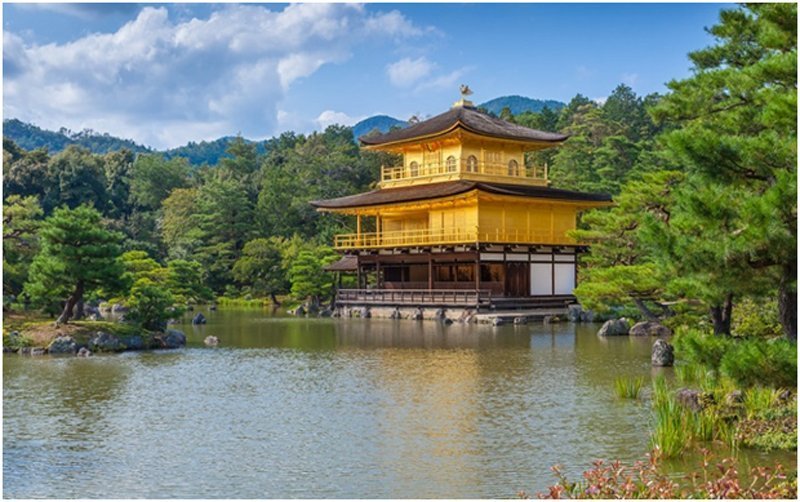 Amidst a placid lake and surrounded by trees is the golden Kinkakuji Temple, a Zen temple wrapped in gold leaf, with the top floor gilded both inside and out.

It was originally built as a retirement home for a famous shogun, who sanctioned the building to become a temple after his death.

The pavilion successfully incorporates three distinct styles of architecture which are shinden, samurai, and zen, specifically on each floor. Each floor of the Kinkaku uses a different architectural style.

Go early in the morning to see the sun glean off of the temple and to beat the crowds. 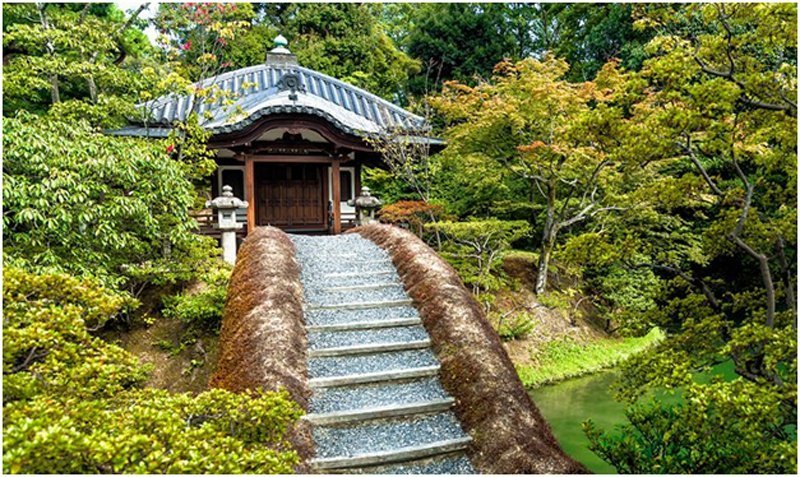 Originally constructed in 1624 for Prince Hachijo Toshihito, brother of Emperor Goyozei, the Katsura Imperial Villa is home to splendid historic architecture and one of Japan’s most famous historic gardens.

Designed by Kobori Enshu with assistance by the prince, this beautiful garden is laid out in such a way that the visitor always sees things from the front; smaller gardens are grouped around a large pool with the summits of Mounts Arashiyama and Kameyama in the background.

Highlights include the Miyuki-mon Gates and the many garden paths, some made from river pebbles and others of rectangular cobbles, edged by mosses and bushes, and leading through further gates into the inner garden with a group of buildings known as the Goten at its center.

A particular highlight here is the veranda of Furu-shoin, specially designed to permit observation of the moon, and the three rooms of the Naka-shoin with its many fine paintings by Japan’s leading artists.

If time allows, be sure to stop and enjoy a meal or light refreshments in one of the many on-site teahouses. 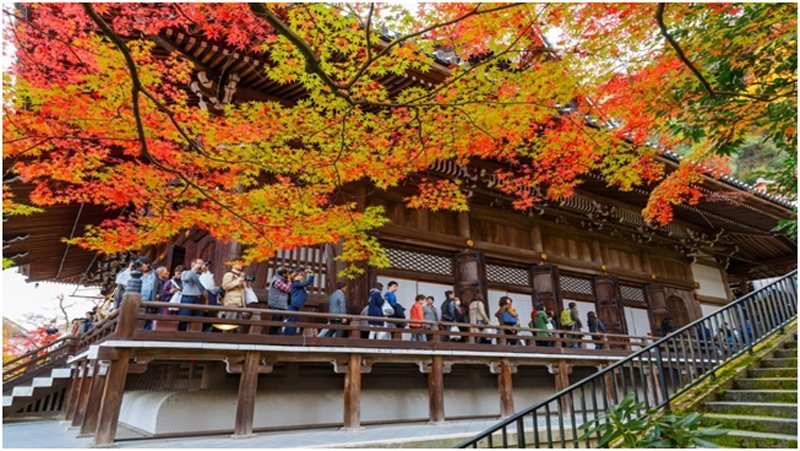 If you’re looking for a peaceful place to enjoy Japanese architecture and relax, go to the Eikando Zenrinji Temple. Not as crowded as many of the other temples in Kyoto, though just as stunning, this temple is hosts a serene environment with large koi ponds.

The best time to visit is in autumn, when the maple leaves turn various shades of red.

Eikando formally known as Zenrinji Temple, belongs to the Jodo sect of Japanese Buddhism. Located just north of the large temple complex of Nanzenji, Eikando temple has a long history, and there are a variety of buildings and a pond garden that visitors can explore.

A court noble of the Heian Period (710-1185) donated his villa to a priest, who converted it into a temple under the name Zenrinji (lit. “temple in a calm grove”). At its founding, Zenrinji was part of the Shingon sect and its first head priest was a disciple of the great Kobo Daishi, the sect’s founder.

Walk up to the pagoda for an even more incredible environment and view of Kyoto. Put on a comfortable pair of shoes and head uphill to a park full of monkeys. 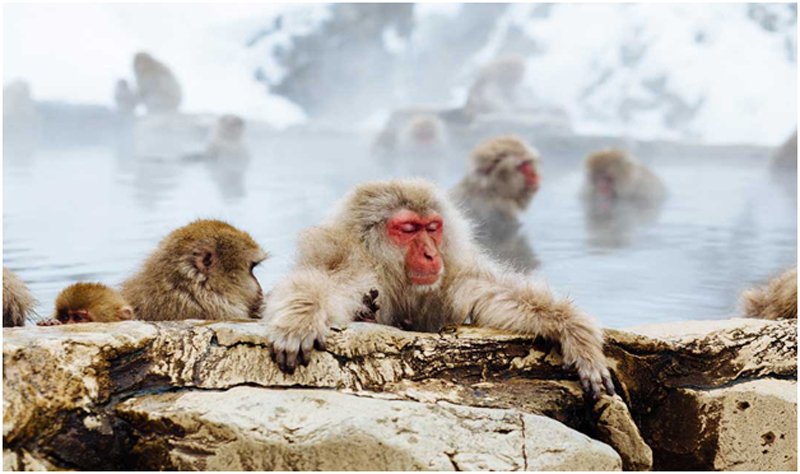 The hike to the top of Mount Arashiyama is treacherous but worth it because of the great view of the city. Visitors are placed in cages so that they are protected from aggressive monkeys during feeding.

Feeds for the monkeys can be bought in the park for a chance to interact with the monkeys.

The park is also educational as there are quizzes that inform visitors about the monkeys and their habitat.

Location: Visitors can get to Iwatayama Monkey Park by either a 30-40-minute hike up the slopes of Mount Arashiyama or a 5-minute walk from the Hankyu Arashiyama Station. 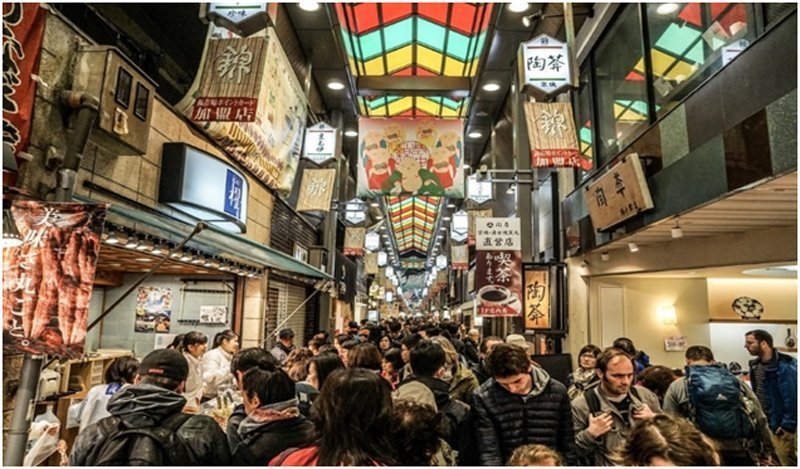 No matter if you’re a shopaholic or just a browser, the Nishiki Market is an interesting place to spend a day. Here, you can find delicious treats, handmade traditional crafts, ceramics, textiles, and more.

Foodies will love the fresh seafood section and sampling the local fare like dumplings, pickles, freshly roasted tea, fish cakes, and yakitori from the food stalls. This is a great stop for extra hot or rainy days, as the entire market is shaded.

Gion is Kyoto’s entertainment district, known for being a hub for artists, theatres, and geishas. It’s easy to spend sun-up to sun-down in this area, exploring all that it has to offer. 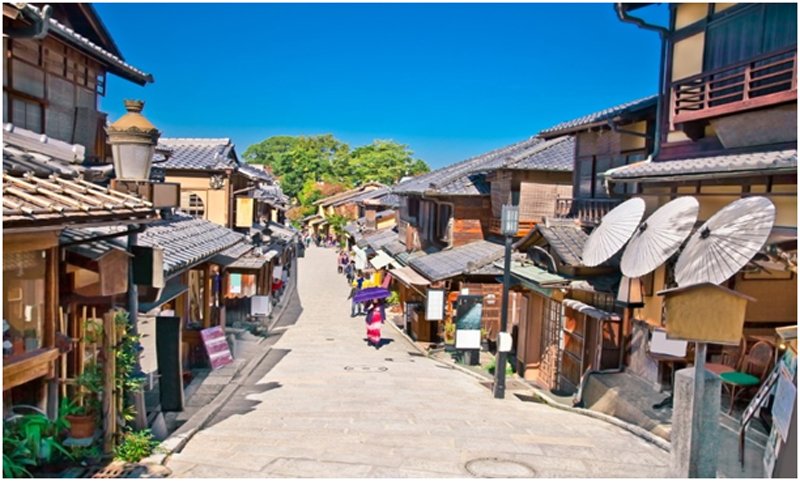 Visitors can also walk down Hanami-koji, the cherry tree lined main street, and write down their hopes and dreams to place upon the Yasui Kompira-gu Shrine’s magical stone. In between cultural attractions are hundreds of cafes, food stalls, and perfectly placed benches.

Handcrafted from wood, this temple houses one thousand incredibly detailed statues of the deity, Kannon, and took over one hundred years to finish.

The contrast between the temple’s simple exterior and ornate interior is a unique atmosphere to walk into.

Each Buddha is covered in gold leaf, and though they look similar, every single one is slightly different. No matter if you are religious or not, this temple is a must-see 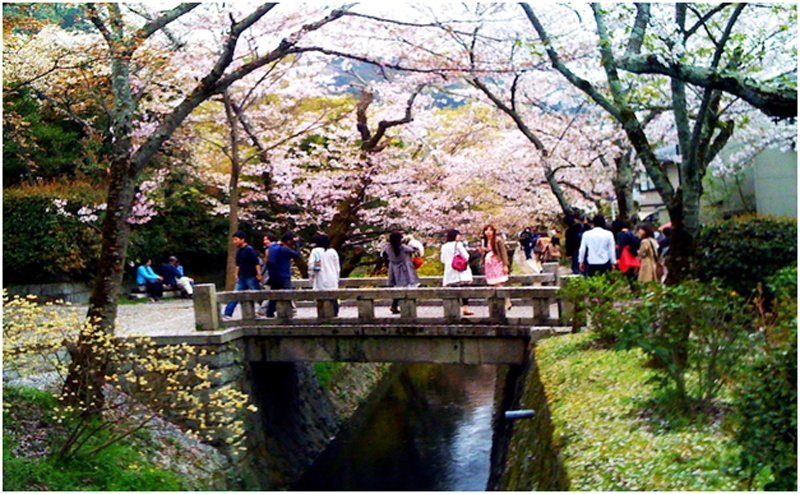 The Philosopher’s Walk is a simple pedestrian trail that runs alongside a canal in Kyoto. On either side of the walkway stand cherry trees, giving the route a mystical and particularly scenic appearance.

The Philosopher’s Walk is shorter than two miles, but it passes by a number of important shrines and temples.

An iconic Japanese philosopher named Nishida Kitaro used to walk along this stretch daily as a form of meditation, which is where the name Philosopher’s Walk originated.

However, you don’t have to be a philosopher to admire the views, get great photos of the cherry trees and see a number of tourist attractions in Kyoto within a hour’s walk. 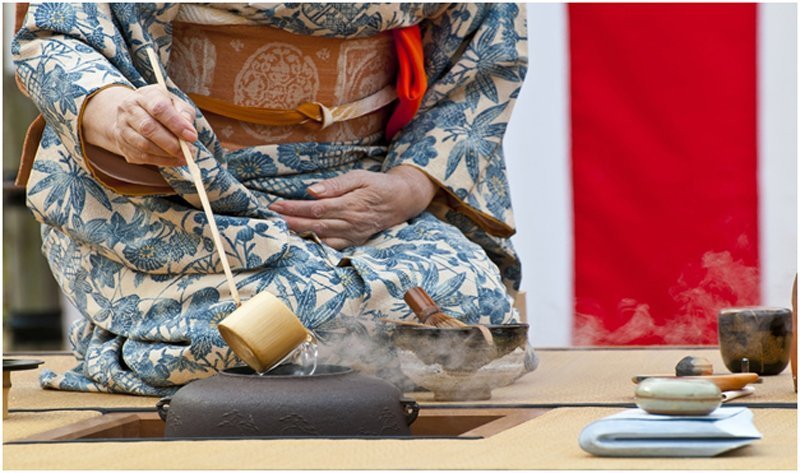 Though tea ceremonies, known as chado or sado, are available all throughout Japan, experiencing one in Kyoto is especially sacred due to its strong Zen Buddhist roots.

During a tea ceremony, the cup of tea is prepared artfully and carefully before serving it.

The ceremony is meant to acknowledge the utensils, each other’s company, and the tea itself all while being mindful of the present moment.

Traditional Dishes You Need to Try in Kyoto 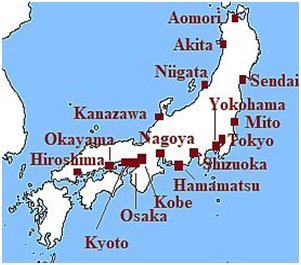 The climate of Kyoto, the ancient Japanese capital, located in the southern part of Honshu Island, is temperate humid, with quite mild winters and hot, moist, and rainy summers.

Like the rest of Japan, the city is affected by the monsoon circulation: in winter, the northwest cold currents will prevail, while in summer, they will be replaced by hot and humid currents of tropical origin.

The city is located about 50 kilometers (30 miles) away from the sea, in a plain surrounded by low mountains, and to the south, it is practically merged with Osaka and Kobe, in a large metropolitan area called Keihanshin.

What I like most about Kyoto is that there’s something for all your senses as well as places to go for peace and contemplation.