October is the beginning of spring in Mauritius where it begins to warm up after a long winter. But the weather is not wet or rainy yet.

Charming flowers are blooming and the sound of animals screaming from the depths of the rainforest. If anyone offers you a trip to Mauritius at any time of the year, we suggest you accept it, but traveling here in October will be such an amazing incredible experience.

Mauritius, known officially as the Republic of Mauritius, is an island nation located off the southeast coast of the African continent in the Indian Ocean. It is a volcanic island of lagoons and palm-fringed beaches with coral reefs surrounding most of the coastline. The island is situated approximately 2400 kilometers off the South East Coast of Africa.

The island covers an area of 1,865 square kilometers or 720 square miles, with 330 kilometers of coastline. Mauritius is 45km in width and 65km in length.

Most Mauritians are bilingual being equally fluent in French and English. English is the official language, but French and Creole are widely spoken. Oriental languages also form part of the linguistic mosaic.

Mauritius has earned the reputation of a top holiday destination, but only few of the island visitors know that Mauritius is one of the leading destinations in the world while referring to the large variety of the activities it offers in comparison to its size.

When visiting Mauritius you are sure to benefit from an amazing selection of almost 200 activities, attractions and places of interested all waiting to discovered. From more traditional museums, parks and reserves, to extreme activities, sea cruises, island trips and many more, you will find it all! So make sure to discover the real Mauritius to the fullest via the various fun and exciting activities it offers!

HIRE A CAR AND DRIVE AROUND:

Renting a car isn’t a very popular option in Mauritius. Most tourists prefer to move around in cabs driven by local drivers. However we would suggest renting a car if you’re even a tad bit adventurous. There is some serious fun to be had.

Nothing compares to discovering a secret beach or stumbling upon an amazing restaurant does it?

Just a word of caution – don’t rely solely on your GPS in Mauritius (unless you want to end up in a sugarcane field with a stray rabbit for company!). Ask for directions – English is widely understood and spoken and Mauritians are used to giving directions to tourists. Try renting a car with a local Mauritian company to save money.

Once behind the wheel, explore the hidden villages and beaches of Mauritius. Make sure you drive along Mauritius’ Southern coast – it’s right up there with the best the island has to offer.

Think black rocks, rugged panoramas, crashing waves, windy surfing beaches, and stunning Mauritian countryside. You won’t forget the feeling of wind hitting your face as you drive through winding roads to reach the southernmost tip of the island at Gris Gris. 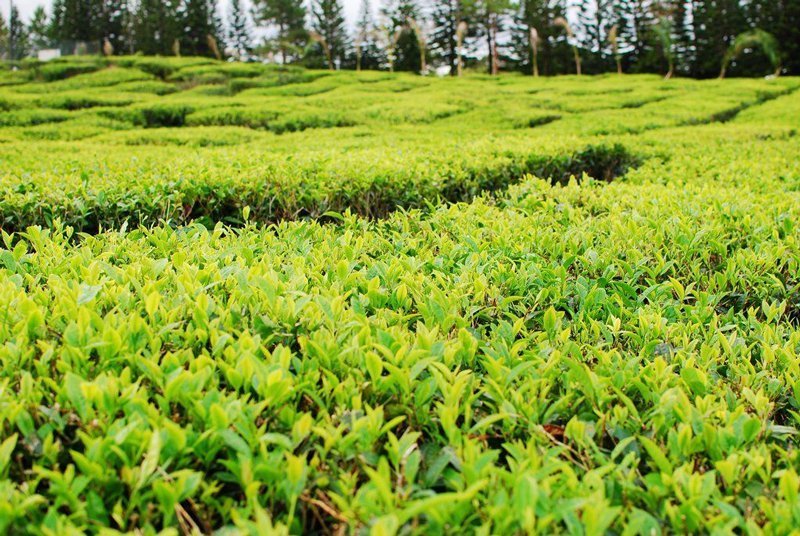 Imagine being the only people on a winding road – a road surrounded by tea plantations and enveloped with fog. As you drive on the mist-laden road, you see tea-pickers at work, rhythmically plucking leaves from bushes.

The mise-en-scene at Bois Cheri Tea Plantations is indeed magical. If you’re a tea enthusiast you could take a guided tour through the tea plantation.

Make sure you dine at their terrace restaurant – it offers stunning panoramic views of inland Mauritius and an extensive variety of teas on the menu. 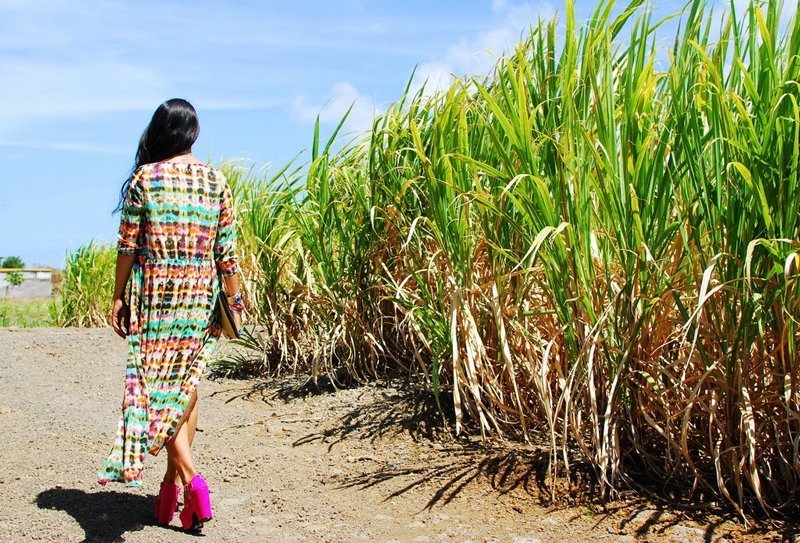 Vast expanses of sugarcane fields are amongst the first things one notices about the island. They seem to go on miles and offer a stunning backdrop to drives on the island. Sugarcane has a long history in Mauritius.

It was introduced to the country by Dutch colonizers, popularized by the French, and developed  by the British as the primary crop in Mauritius during the nineteenth century. Make sure you wander through a few sugarcane fields while you are in Mauritius.

It is easy to get lost in the narrow passageways of sugarcane fields, with hundreds of swaying sugarcane plants for company. Better still, visit L’Aventure Du Sucre – a sugar museum with its own sugarcane fields.

It provides a comprehensive overview of the history of sugarcane and its importance for the island. It is possible to sample a variety of sugars here. While you’re at it, don’t leave Mauritius without trying a glass of fresh sugarcane juice – nectar, it is that!! 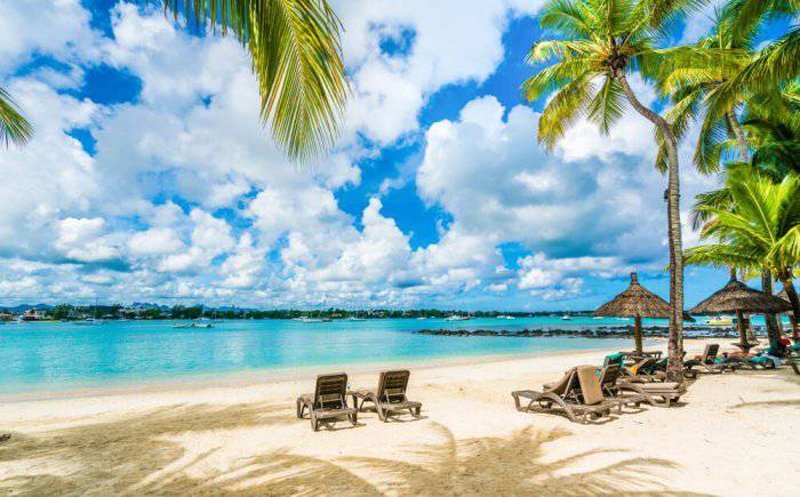 It would be unfair to leave Mauritius’ beaches out of this list wouldn’t it? The country boasts of some of the finest beaches in the world – they’re stupidly gorgeous. Seriously, nothing should be allowed to be that pretty.

Some of our favorites include the Belle Mare Beach, the hidden La Cuvette beach in the north, and the rugged beaches of the South, especially Le Morne. If you love kite-surfing, Le Morne is the place for you.

11 Dreamy Beaches You Will Want To Explore In Mauritius 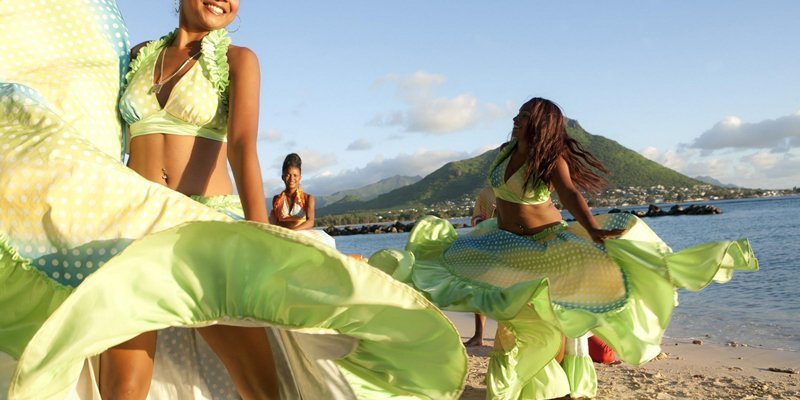 Mauritians are friendly and welcoming people. The Mauritian people form a multiethnic society which means they are mainly of mixed races and have ancestors of Asian, Indian, French, British and Chinese origins.

The majority is descendants from Indian people and is referred to as Indo-Mauritians.

Almost half of the population practice Hinduism, other dominant religions are Roman Catholicism and Islam.

The expansive coast-line of the island means Mauritius offers a variety of water sports and activities including snorkeling, deep-sea diving, deep-sea fishing, parasailing, and scuba diving. But it also offers visitors a chance to experience some rather unique experiences – an Undersea Walk.

Here one is suspended meters below the sea with a giant visor to provide a continuous supply of oxygen.

It’s scary at first but soon you start walking around on the ocean bed, making friends with colorful fish and miscellaneous sea creatures. 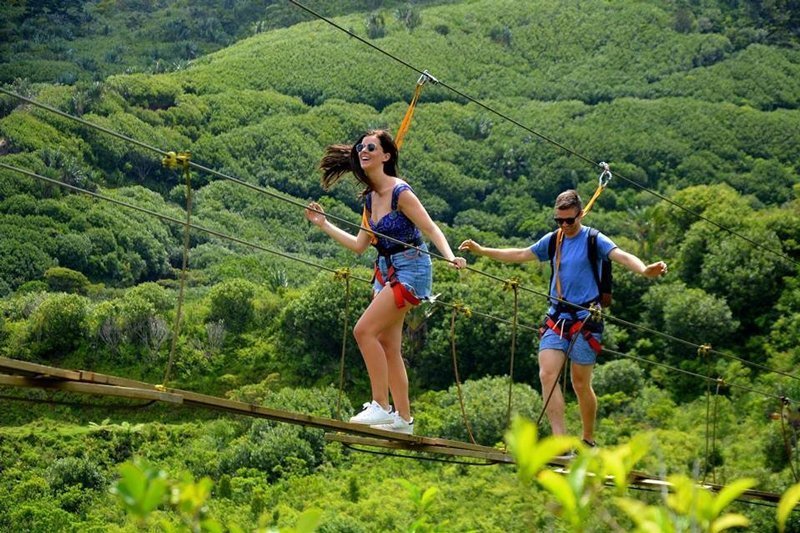 Next, on the list of the amazing tourist’s spots around in Mauritius for the nature lovers include the La Vallee Des Couleurs, Nature Park. The park is known around the world for being home to some of the rare and indigenous species of both flora and fauna.

Famous for: Simply exploring and even quad biking

23 different colors on earth gave La Vallee des Couleurs Nature Park a prominent place in the travel and tourism section of Mauritius. This park is termed as one of the unique attractions of the world as it holds indigenous but rare species of flora and fauna. A 1-2 hour long tour will let your eyes witness the best formations of earth in different manner here.

Highlights: The different ranges of natural landscapes, plateaus, mountains, valleys, craters and crater-lakes. The four wonderful waterfalls are adding up the beauty of the place. They are Cascade Vacoas, Cascade Bois de Natte, Cascade Cheveux d’Ange and Cascade Chamouzé.

Activities: Walking, quad-biking etc are the favorite activities of the visitors at the park.

Best time to visit: Any time during the year is suitable to visit the park. 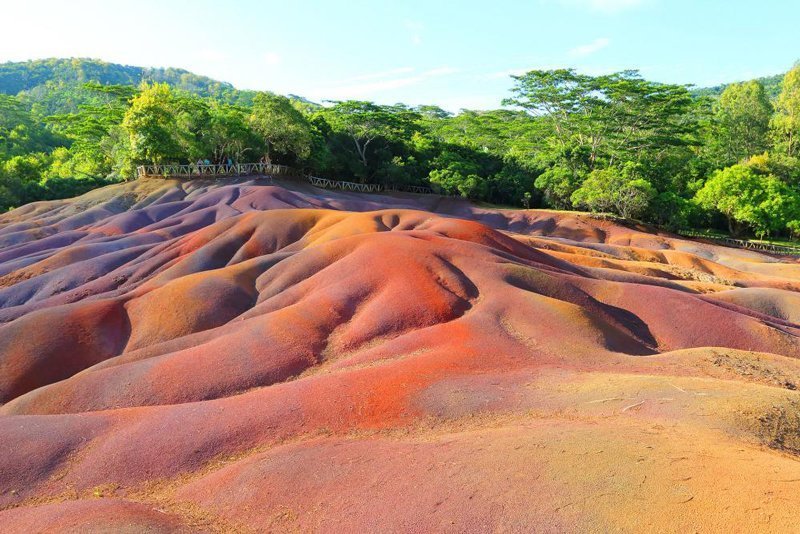 This little known village in South Mauritius holds many surprises. The Colored Earth, which is a geological oddity of sorts, is first on the list. Purples, yellows, oranges, and reds coalesce to form an uneven volcanic surface.

You can stare dumbstruck at the wonders of nature or make friends with a giant tortoise – the choice is yours. 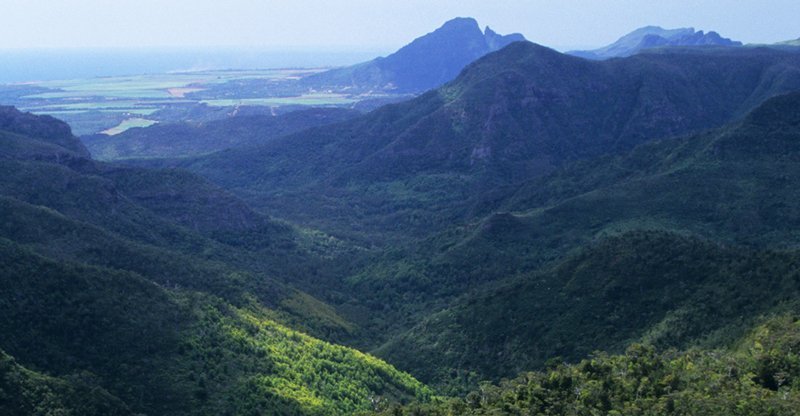 The drive to Chamarel is punctuated by a number of waterfalls and gorges. Make sure you stop and walk to the viewpoints for rugged panoramas of the mountainous areas of Mauritius. 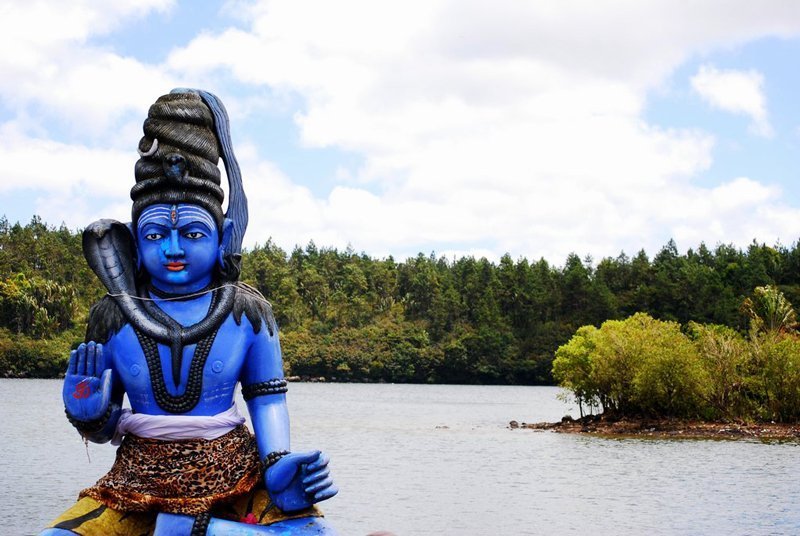 Mauritius is an endlessly fascinating blend of varied cultures. This rich diversity manifests itself in traditions and languages. English might be the official language but Creole, Hindi, French, and Bhojpuri are widely spoken in the country. Similarly you will find churches, mosques, temples, and Chinese pagodas scattered around the island.

Make sure you explore intricately carved Mauritian temples, educate yourself about colorful Mauritian folklore and festivals, and participate in the energetic Sega dance. Immerse yourself in the culture of the island  and you are bound to fall in love with it. 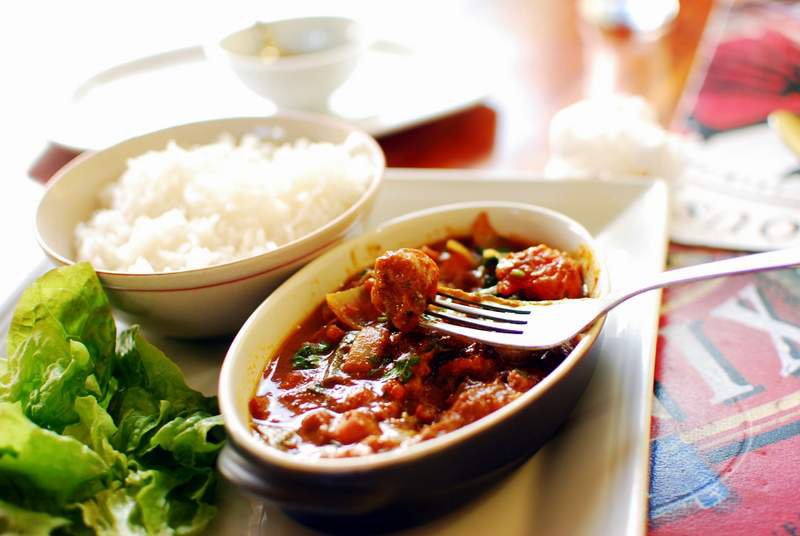 Mauritian Street Food is amongst the best in the world – there, we said it! A unique mix of Creole, African, Indian, and Chinese influences, the dishes offer bursts of intricate flavors.

Spices, colors and flavors come together to form a scrumptious (yet little known!) cuisine. Where else would you find a French bouillon laced with Indian spices? 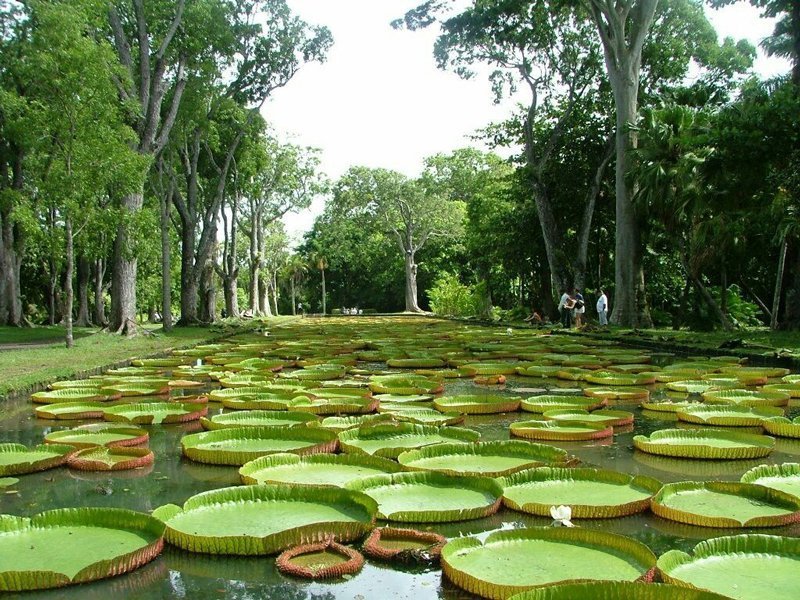 Also known as Sir Seewoosagur Ramgoolam Botanical Garden, the plot covers 60 acres of land and features a number of varieties of palm trees.

One unique feature of the garden is its giant lily ponds with tadpoles and frogs, fruit bat trees with bats hanging from the branches, lakes with giant turtles and fishes without forgetting the trees planted by famous figures including Nelson Mandela and Indira Ghandi. 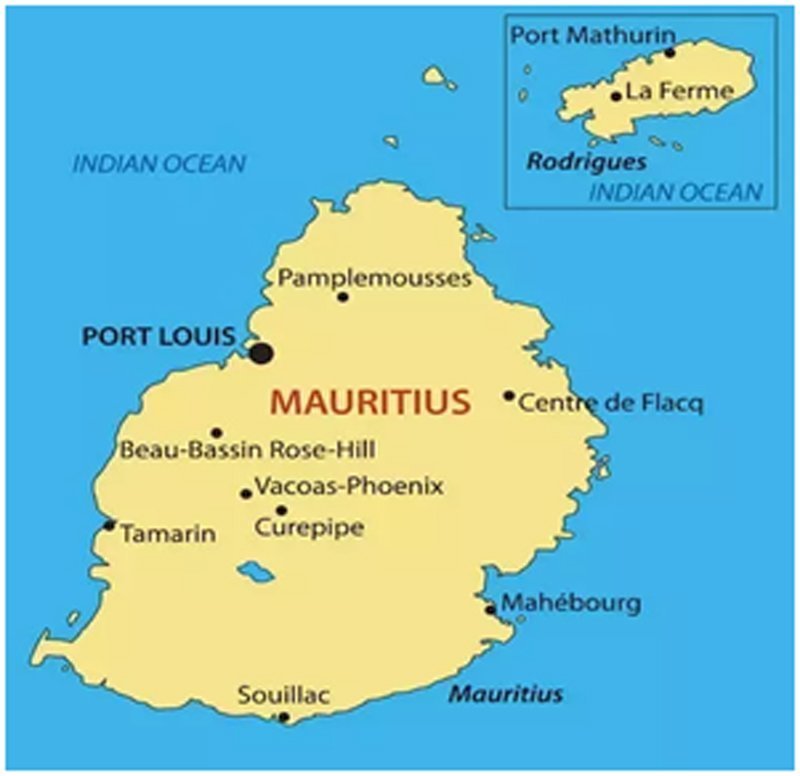 Mauritius and Rodrigues belong to the Mascarene islands in the Indian Ocean. Mauritius is the second biggest island belonging to the group of islands called the Mascarenes or ‘Mascareignes’ as they are called in French. Rodrigues Island and some other smaller islands belong to Mauritius too.

The island was created by volcanic activity more than 8 million years ago. There are many scenic waterfalls especially in the south west of the island. The island’s highest mountain is the ‘Peak of the Little Black River’, Piton de la Petite Riviere Noire, with 828m or 2,717ft.

That’s it! We hope you enjoyed our list of things. Mauritius has so much to offer that it’s difficult to sum it up in one post.