It’s been a long way until we get to explore everything Brazil has to offer. You could flip through the stunning Northeast, the European South and the metropolitan Southeast.

On this encounter, you will take a look at Central West region, which has only three states and the purpose-built Federal District, the national capital, Brasília. The capital was designed by the celebrated architect Oscar Niemeyer, who brought modernist buildings such as the curved, glass-roofed Cathedral of Brasília. Here are the states and theis capitals:

Many tourists are exploring new options in Brazil and Central West became a spotlight and the tourism stars are Pantanal, a natural area known as the world’s largest tropical wetland area, and Chapadas such as Guimarães, in Mato Grosso state, and Veadeiros in Goiás state.

But, let’s start with another highlight: Brasília. 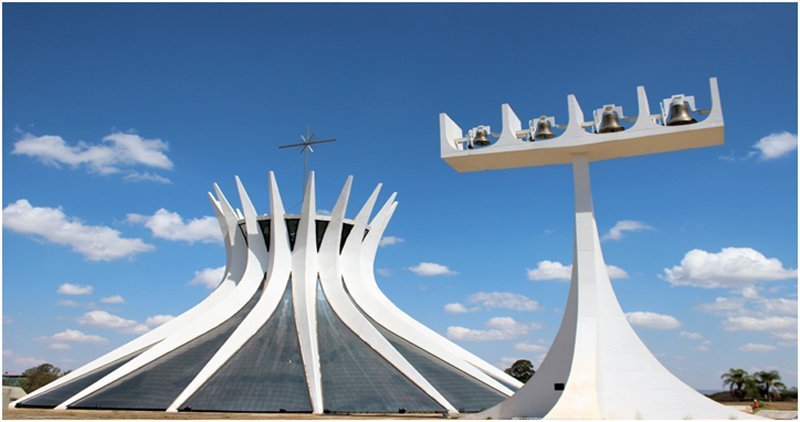 The dry Brasília was built in a deserted area in Goiás state. Creating the federal capital in Brasília was an idea that came up in the 18th century but it only started being built after Juscelino Kubitschek election in 1956. The capital was inaugurated on April 21st, 1960, still unfinished. It took one more decade to move all government departments there and make the city working a 100%. In 1987, it became a World Heritage Site, being recognized as one of the most important urban-architectural projects in the world. Therefore, if you’re looking for architectural art everywhere you look, Brasília is the place for you!

The best season for visiting Brasília is between May and September, known as the dry season. May and June are the best time for visiting due the mild weather. The wet season is between October and April, but the most rainy days are between November and January.

The best places to visit and take nice photos are: 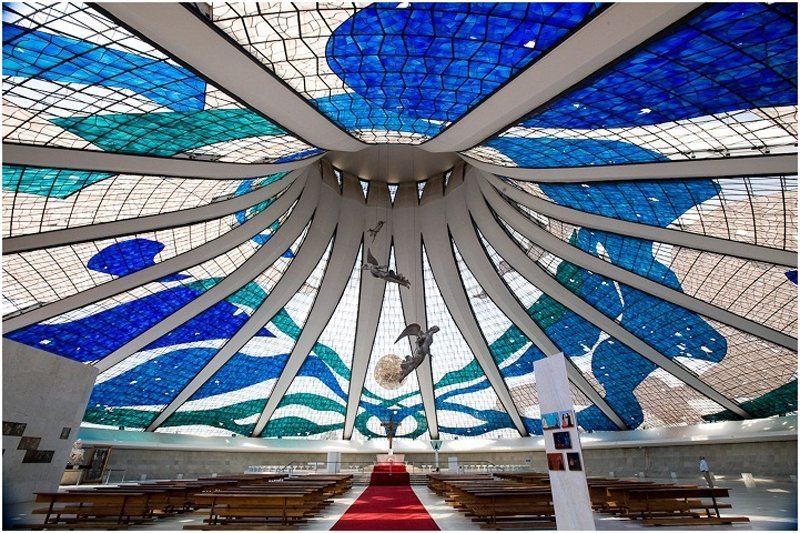 Inside view of Brasília Metropolitan Cathedral 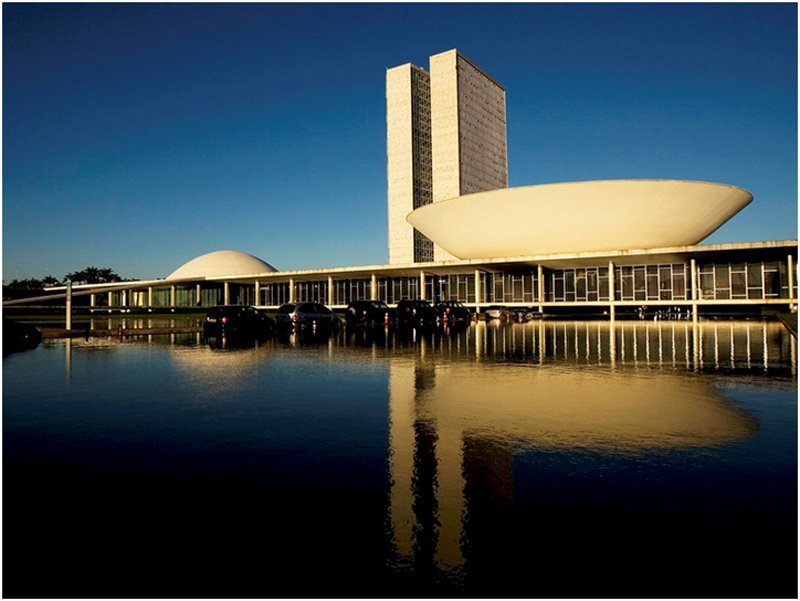 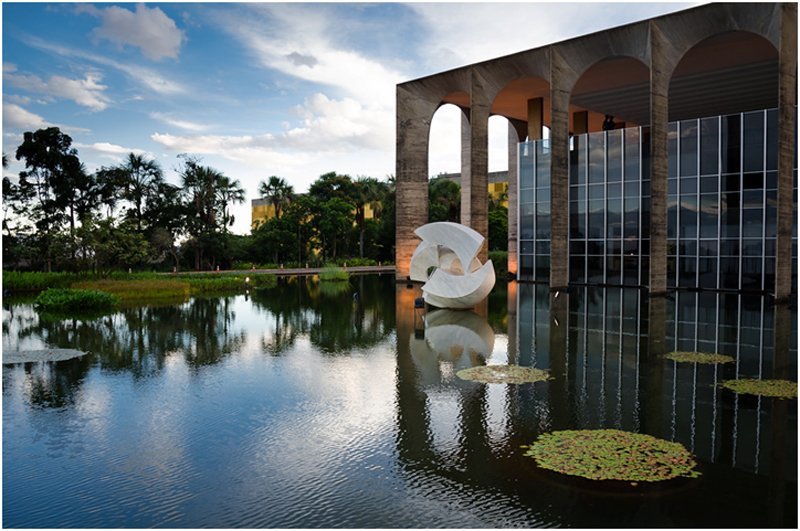 Itamaraty Palace and its Meteor 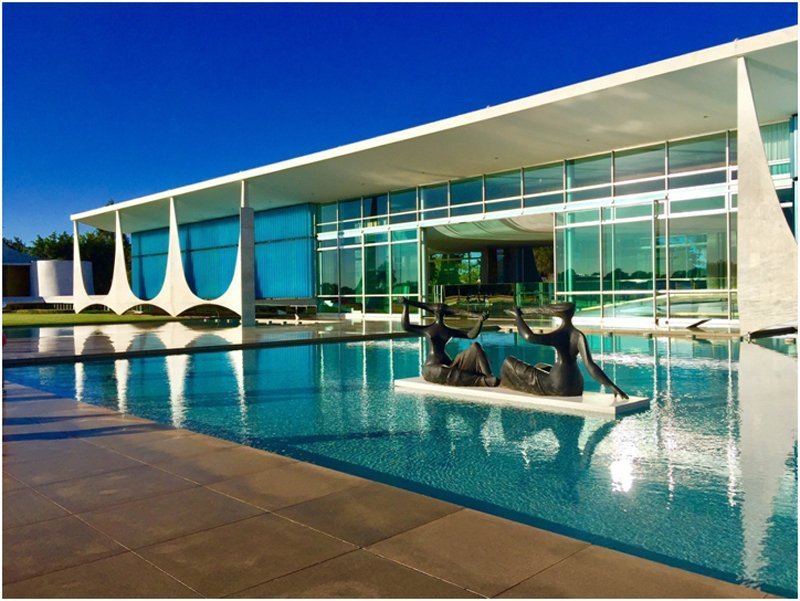 I can also recommend the boat ride on Paranoá Lake and then visiting Pontão do Lago Sul, an entertainment area with a beautiful view of the lake. Go for a happy hour in one of the pubs or restaurants in the area and enjoy the sunset. Also the Zoo and Botanical Garden is worth to visit. For a nice hiking and exercising, don’t miss Sarah Kubitscheck City Park and then go for a relaxing time at Brasília National Park with many natural pools.

Enjoy the best from Goiás

When I think about Goiás, the hot weather comes to my mind. And I’m not wrong! Even though, this state is a great option to enjoy hot temperatures not associated to beaches but to thermal water parks, lakes and waterfalls.

Here are some unmissable visiting spots: 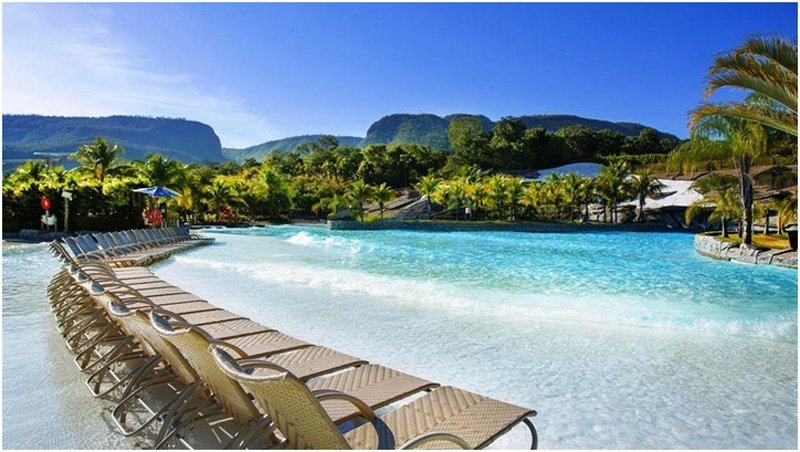 You can enjoy some more of eco-tourism in Cocalzinho de Goiás, Caldas Novas, Vila Propício, São João D’Aliança, Serranópolis and Emas National Park, and the paradise called Formosa. For getting in touch with the best of food and historic culture, don’t miss Pirenópolis and the Historical and Cultural Heritage of Humanity site since 2001, Cidade de Goiás. 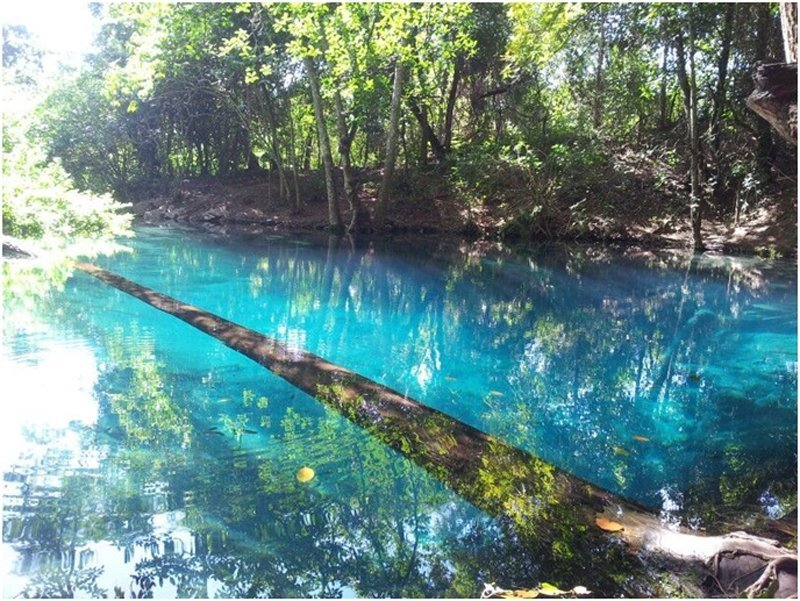 Most of the state is covered with Amazon Rainforest, savannahs and wetlands. Wildlife diversity is found in the preserved areas such as Chapada dos Guimarães National Park. 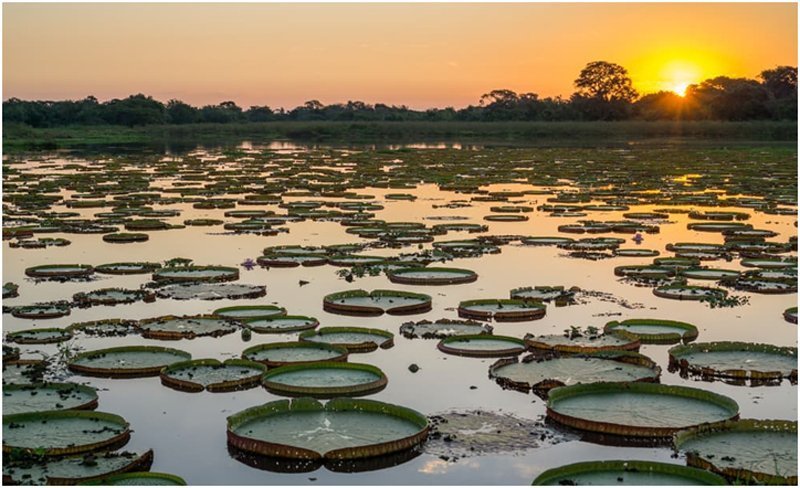 Get amazed with Mato Grosso do Sul

Starting with the capital, Campo Grande is a hub for business and tourism. It is surprisingly planned with organized traffic and busy social life. From spending an afternoon in Nações Indígenas Park, passing through the Artisan House to an irresistible dinner at Campo Grande Central Market, you will feel renewed in a weekend and get ready for a deeper exploration in Mato Grosso do Sul. Here are other places you shouldn’t miss in Mato Grosso do Sul: 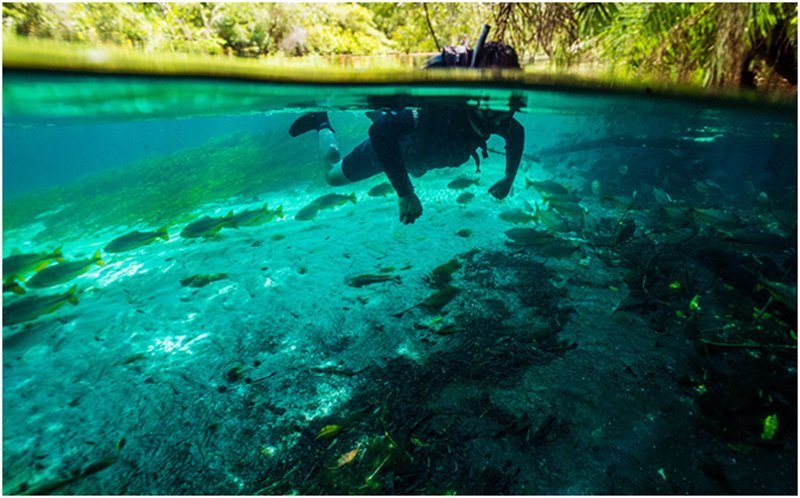 The town of Bonito is an ecotourism hub in Brazil which attracts thousands of tourists from many countries every year.

The types of tours can be divided in: floating on rivers, exploring caves, waterfalls, adventure, bathing and watching non-aquatic animals. You can choose one or mix them according to your preference.

All attractions in Bonito must be scheduled in advance. There aren’t any box offices selling tickets at the attractions, all of them should be purchased at the licensed local tour agencies. There are few spots per hour, so the tours are quite exclusive.

The most famous tour in Bonito is floating. In neoprene and snorkel gear, you go down the crystal clear rivers, watching fishes swimming around you. You can’t swim in there because the sediment from the bottom of rivers cannot be lifted, so it’s just floating. Even if you don’t know how to swim, you won’t be frustrated on this experience because the use of life jackets is mandatory in all aquatic tours. 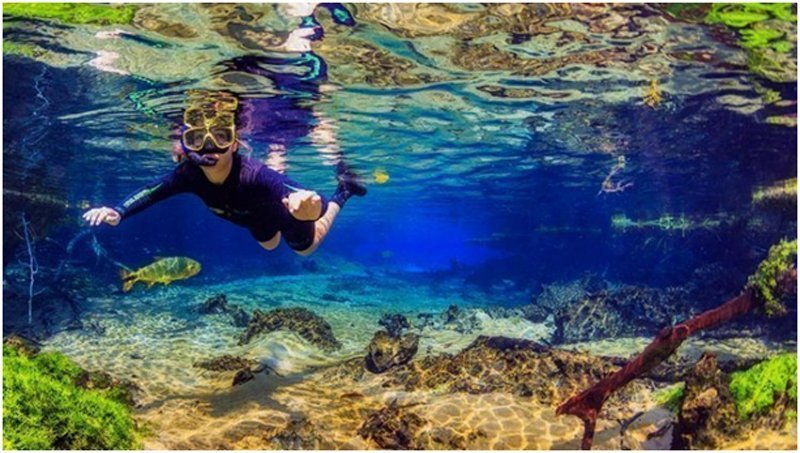 The must go floating experience is at Aquário Natural with abundant aquatic vegetation, logs and rocks and the scenery is the best opportunity to take underwater photos (waterproof cameras and GoPros can be rented at receptive agencies in Bonito). The most famous and most adventurous, though, is floating at Rio da Prata. What makes it so special is its long course, which begins on the shallower, warmer Olho d’Água River, and ends on the deepest, iciest Silver River.

Visiting the caves is also another unique experience. The most famous is Gruta do Lago Azul (Blue Lake Cave), an unmissable tour but swimming on the lake is forbidden. The other cave you can meet at the same day is Grutas de São Miguel, this one brings a different experience and the best of this is observing the striking designs of stalactites, stalagmites and other formations within the cave, created by dripping water over thousands of years.

If you are looking for stunning waterfalls, Estância Mimosa is the right place for you! There are 7 bathing stops in a 2.8 km waterfall circuit, including a diving platform from a height of 6 meters. And the best part of this farm trip is having a nice lunch with their caramel handmade known in Brazil as doce de leite. Another option close to Estância Mimosa is Parque das Cachoeiras (Waterfalls Park in English), with seven waterfalls circuit and to jump in the water, instead of a platform there is a zip line. In case you’re looking for more waterfalls options, you can go for Cachoeiras do Rio do Peixe or Fazenda Ceita Corê. 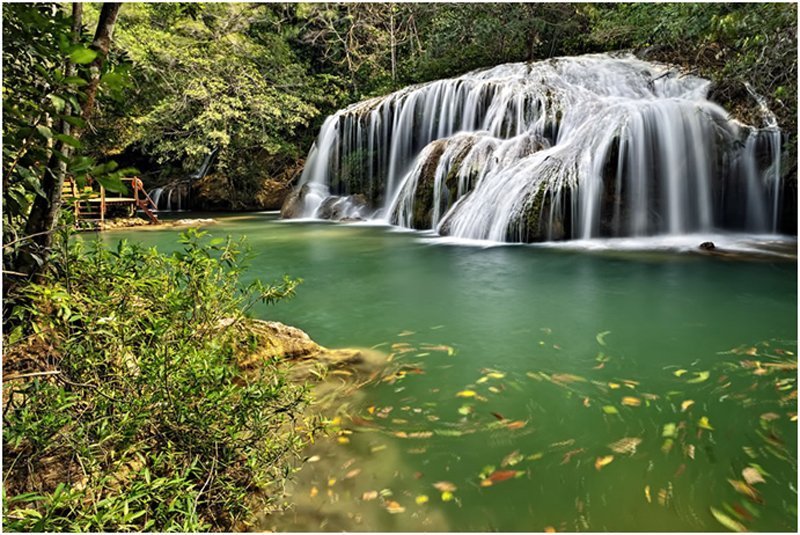 One of Estância Mimosa waterfalls

If you’re looking for adventure, the top attraction is rappelling at Anhumas Abyss, a 72-meter-high downhill, initiated through a narrow crevice, and that continues in the flooded cave, followed by a boat ride and a scuba dive (or snorkelling). Underwater you observe impressive limestone formations of thousands of years. The only way in and out of the cave is by rappelling, so training is given the day before at a facility in downtown Bonito. This is the most expensive tour in Bonito, with only two groups of 20 people each per day. Booking this tour should be made as earlier as possible, especially if you’re diving.

Another activity is diving at Lagoa Misteriosa (Mysterious Lake). The name is due the mystery is about its exact depth, which has not been identified, but it is known to exceed 220 meters. You can either go on a cylinder dive or snorkelling. Besides this tour, I can mention tubing, rafting and tree climbing tours on Formoso River at Eco Park Porto da Ilha combined with obstacles and zip lines. They also have duck and stand-up paddle.

Once you go to Bonito, there are plenty of other activities and tours, so the best option would be at least seven days in this paradise.

Once you go to Pantanal, the town you should start is Miranda – 207 km from Campo Grande – one of the oldest towns of Mato Grosso do Sul. Founded in 1778, is known as the Pantanal Portal, for having part of its urban area inserted in Pantanal territory. With 25 thousand inhabitants, Miranda has in rural tourism one of its main economic references. There are plenty of tourist farms, such as Fazenda São Francisco and Fazenda Caiaman, for example, and they are all open for visitation all year round.

There are so many attractions in Pantanal that is difficult to choose what to do. There are 230 species of fish, 650 types of birds, 80 species of mammals and 50 species of reptiles. It is one of Brazil’s leading eco-tourism destinations with international fame. 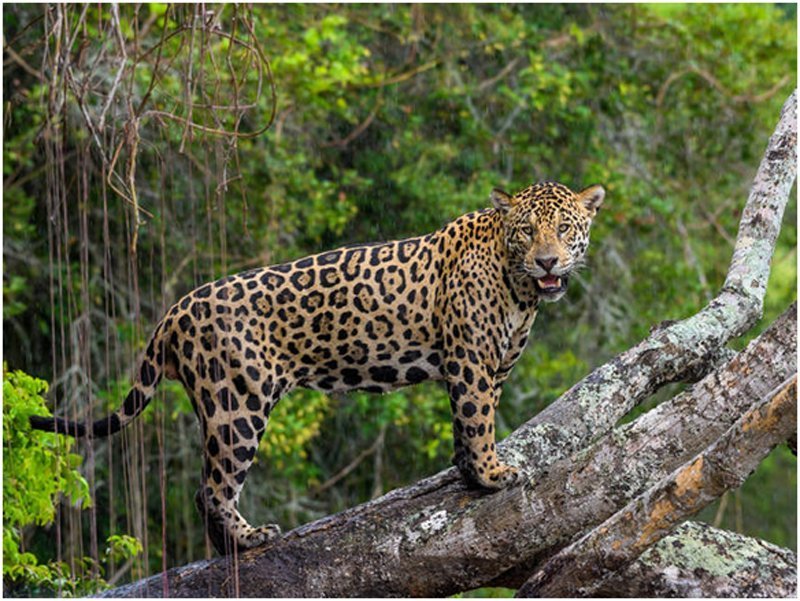 One famous road trip is taking the Estrada Parque, a 120km road trip between Corumbá and Miranda. There you can check on beautiful landscaping combined with animals such as alligators, capybaras, pacas, anteaters, coatis, monkeys and, with luck, even jaguars. To enjoy the most this road trip, I’d recommend with a local tour guide, since they know the best spots to see the animals and taking the best photos.

In Pantanal, a must do is taking a boat tour. There are all the options available, from simpler to upscale rides. For a better interaction with animals, the best option would be going on smaller boats.

The best way to see those animals is taking a night tour, best known as focagem noturna. You can go on these tours on a car or boat and you can schedule them at the hotel. Also, a horseback riding is a common activity and the tours take around 2 hours.

If you want to get rid of the mainstream trips in Brazil, the Central West is the best option and it will become one of the top unforgettable vacations in your life.

For my next post, I’ll close Brazil exploring North region. You’ll see that there is way more than just Amazon in there. Stay in touch! See ya!